Kos: History throughout the ages

Kos is considered to be the first inhabited island in the wider area of the Dodecanese. The island’s rich history is easily evident through the array of open-air archaeological sites, blended with iconic Roman buildings and Ottoman mosques in the city center; a fusion of cultures and civilisations interrelated for eternity.

2.800BC to 1.100BC
Kos in prehistoric
and early protohistoric period

According to archaeological finds, the island of Kos was inhabited as early as the first Primaeval Bronze Age (2.900 - 2.100 BC). Remains dating from the Mycenaean Age and the Later Bronze Age (1.600 - 1.150 BC) are also to be found on the island and there is a great number and variety of "Koan" ceramics from the Geometric Age.

In June 1922, the Italians Alessandro Della Setta and Doro Levi conducted excavations in the cave of the White Stone on Mount Zini, in Kefalos. They unearthed, among other things, fragments of Neolithic clay vessels, ellipsoidal millstones, many pieces of pottery, an incised clay vessel, obsidian blades and cores, grooming objects and food remains. In 1943, again, Giuseppe Lazzara excavated prehistoric tombs on the Asklupi hill, near the town of Kos. The type of vessels discovered in the graves along with the burial way point to the first Bronze Age (2800-2000 BC).

Findings of excavations in Mycenaean tombs in Kos, presented in the Archeological Museum of Kos
2000BC - 1100BC
Bronze age:
Minoans & Mycenae

The first inhabitant settlement around 2300-2000 BC is positioned in the area of Kos town. During the middle Bronze Age (2000-1600 BC), this settlement expanded and the
first Minoan elements appeared, showing remarkable development over the next hundred years. More recent excavations have revealed important Minoan finds in the Seragia area, where the settlement was located. In the two centuries that followed after 1450 BC, the settlement attained more of a Mycenaean character and expanded throughout the Seragia hill. Its cemetery was found southwest of the city, at the sites of Eleonas and Lagada, where 84 graves were excavated. Vessels of exceptional art found in this cemetery are displayed in the Museum of Kos, while the series of vases from the Seragia area is also very interesting. Mycenaean weapons and vases were also discovered in the area of Asclepieion. 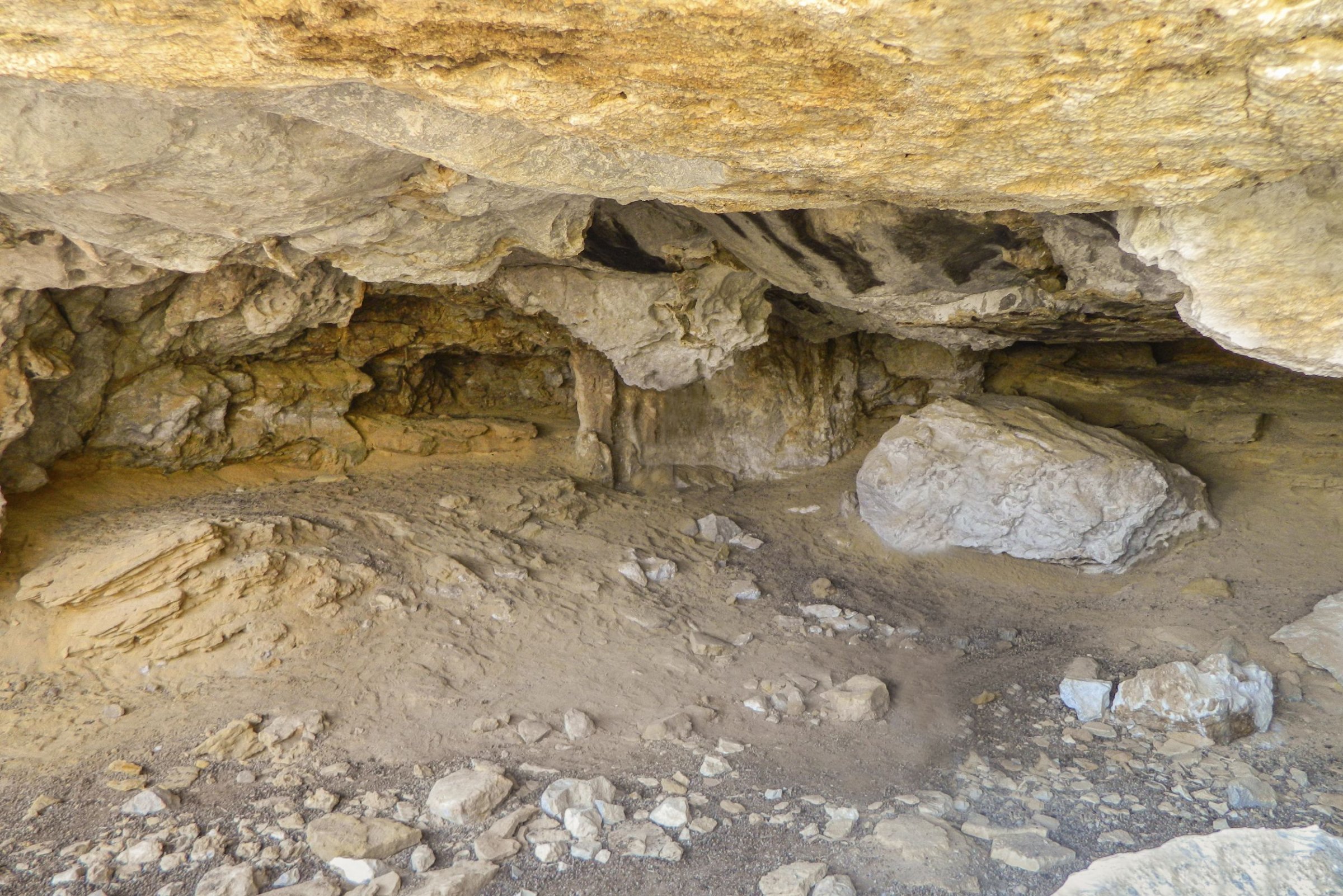 The cave of white stone today

Our knowledge of the prehistoric years of Kos is complemented by mythology, from which we can draw several conclusions regarding the origin, actions and worship of gods and heroes, as well as their connection to Kos.

From the myth of War of the Titans we learn that the war between the Olympian gods and the Titans continued in Kos. God Poseidon chased the titan Polyvotis all the way here, and in the final phase of their battle he used his trident to detach a part of the island with which he crushed him; this is how Nisyros is supposed to have been formed. Polyvotis, still trapped under Nisyros, tries to free himself and his struggle was used to explain the volcanic activity of the island!

The fight between Antagoras & Hercules, statue in Antagorias square in Kos town
A battle for the ages
Hercules & Antagoras

Of all mythical heroes, one's name is most prominently associated with Kos: Hercules. Returning to his homeland from Kolchida, he encountered a violent storm and found himself shipwrecked on Kos with a few of his companions. While wandering around the inland, they met the shepherd Antagoras with his flock. Hercules asked to buy a sheep and Antagoras said he would give it to him if he could defeat him. Hercules fought with Antagoras. His comrades gradually joined the battle on his side and the people of Kos joined the battle, defending Antagoras. Hercules, tired from the journey, could not endure the continued fighting and after leaving the battle, he fled to Pyli. There, he persuaded the inhabitants to declare war on King Eurypylus of Kos. In the ensuing battle, Hercules killed Eurypylus and married his daughter Chalciopi. Thus began the reign of the Heracleides generation on Kos. The myth probably symbolises the struggle between Dorians and locals for control over the island. 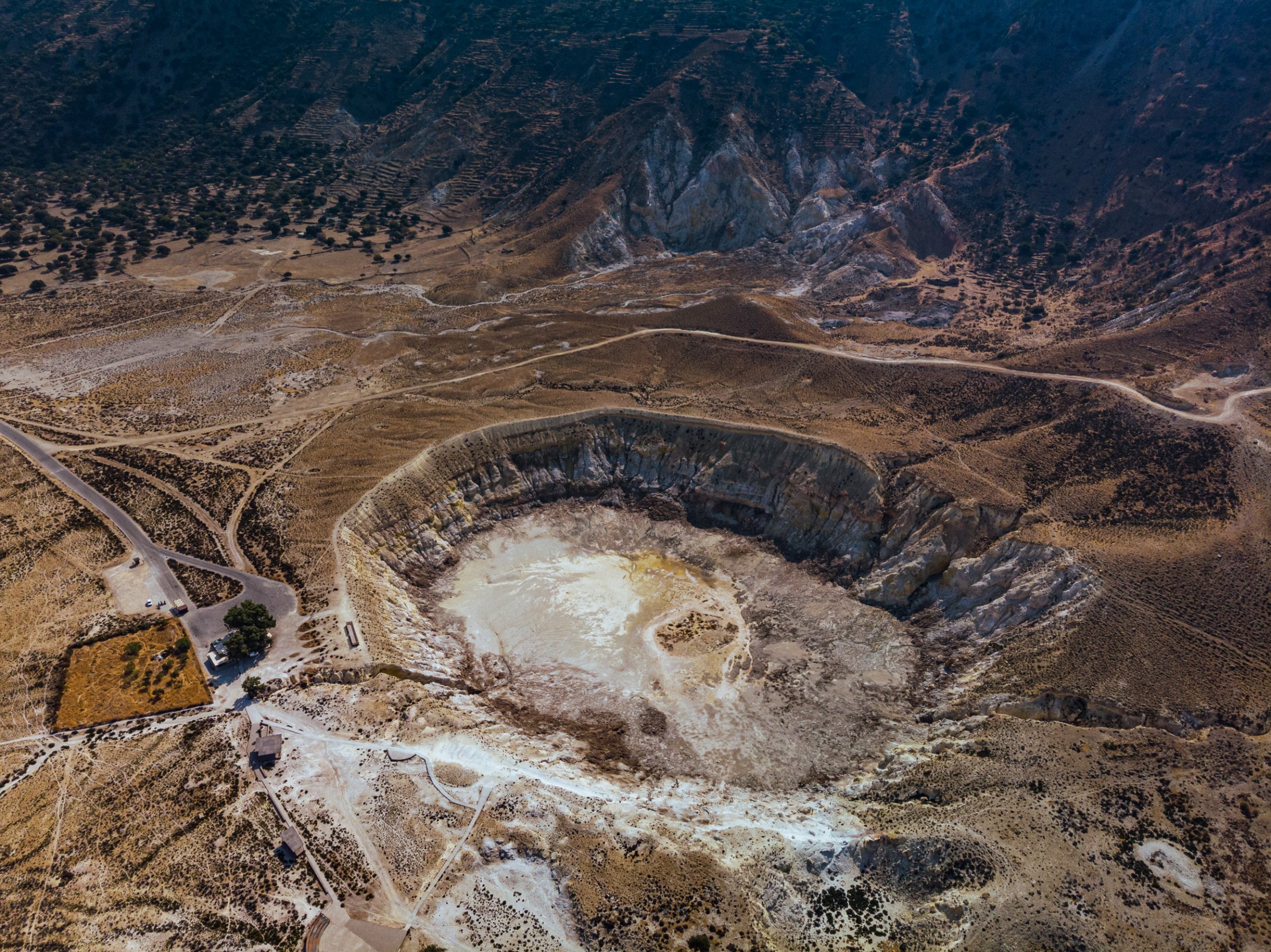 The crater of the volcano in Nisyros which is named "Polivotis". According to the myth, the titan was buried beneath by god Poseidon. The tremors and gas produced from the volcano was thought to have been Polivotis who is trying to escape.

Kos participated in the Trojan War and between the 7th and 6th century, it became a member of the Doric Hexapolis. Seven Demes (townships) were established on the island and the inhabitants prospered. The most important town of the island was probably Astypalaia, in the area where Kefalos is found today.

In the middle of the 7th century BC, the kingdom of Lydia was founded and gained power in the area. At the time of its peak, it had expanded to the entire area of the Anatolia coast and islands. In the middle of the 6th century BC, the Persians conquered the Lydians. Kos was late in submitting, perhaps because it was convenient for the Persians to maintain the good relations. The Greek victories at Salamis, Plataea and Mycale thwarted the Persian danger and made the people of Kos rebel against the Persian rule and join the Athenian alliance, believing it would secure their interests.

The Asclepieion of Kos
5th century B.C.
The birth of Hippocrates
and Kos town

The fifth century BC was marked by the birth of Hippocrates, the Father of Medicine who would go on to leave his mark on the island for centuries to come and the construction of the famous Asclepieion of Kos.

In 431 BC the great civil war between Athens, Sparta and their allies began. At the beginning of the war, people of Kos were on the side of the Athenians, but later, just like other regions, they would deflect between sides, depending on their interests and the influences they were under. The civil war ended in 404 B.C. with a victory for Sparta. Around 393 B.C., after its detachment from the influence of Sparta, Kos started taking steps towards democracy. After a period of conflict between democrats and oligarchs, it was decided to establish a new city called "Kos", which was fully democratic.

The Hellenistic era was the most brilliant period in Kos' ancient history and was characterised by marvelous economic and cultural prosperity as well as an excellent operation of the democratic institutions.

The fame of the Asclepieion and its doctors went beyond the borders of the island and became nationwide. The fortifications of the city, its market, one of the largest in the ancient world, theatres, gymnasiums and other temples brought to life a whole new world which existed on the very same spot of the present-day city of Kos, while sculptures, inscriptions and writings testify to this "greatness". 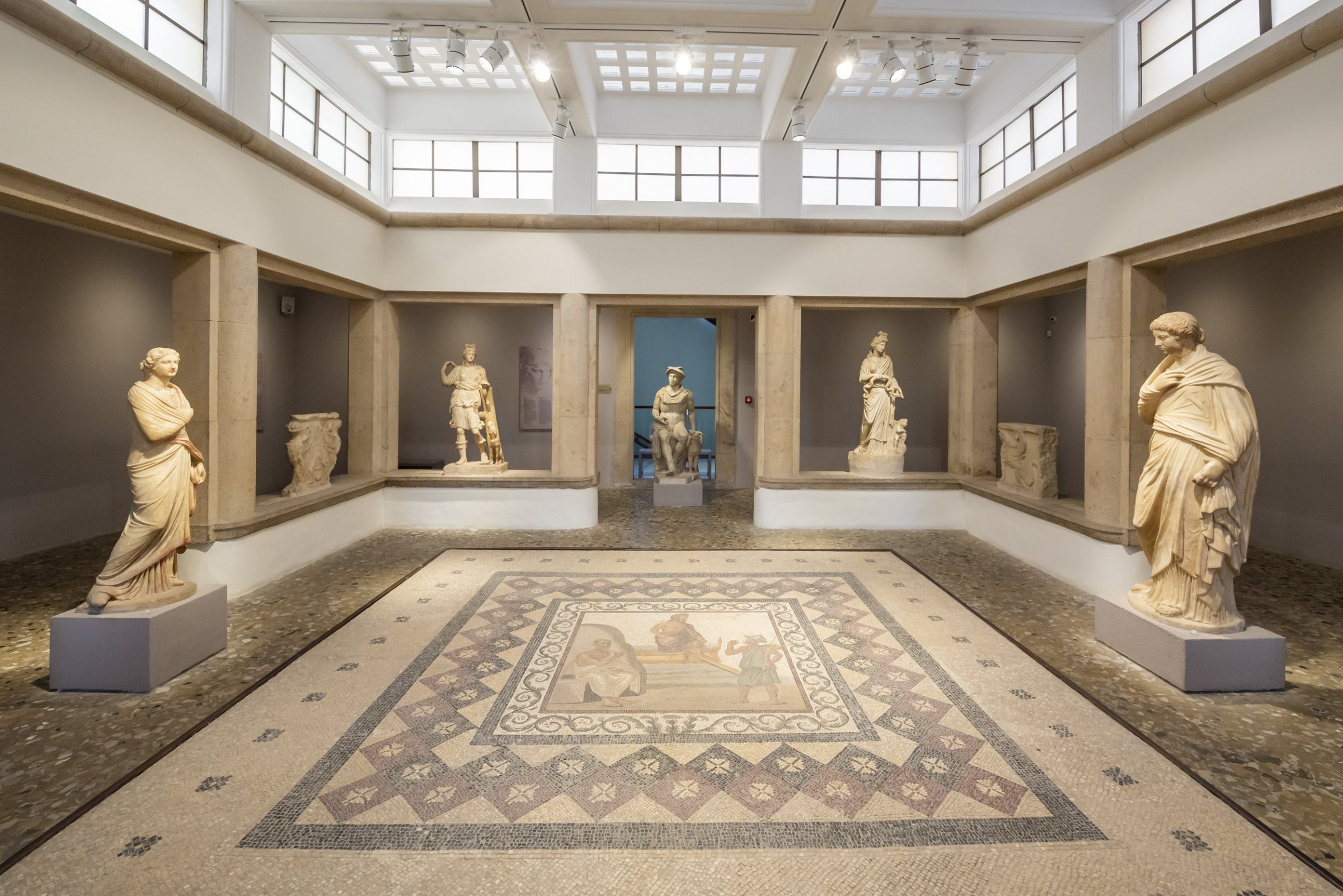 Hellenistic period statues and mosaic at display at the archeaological museum of Kos.

Rome and the Middle Ages

Kos' association with the Romans began in 200 BC before Kos became a Roman province. The island develops friendly relations with Rome during this period and manages to remain a free and independent state. However, Kos lost its political freedom in the years of Caesar, who occupied the island in 48 BC. Kos then became a tributary state to the Romans who demanded taxes that the people of Kos were unable to pay. So they acquired a work of art, the "Emerging Venus" made by the famous painter of Kos, Apelis.
Even during this period, Kos continues to develop and prosper.
The construction of important monuments, such as the Nymphaeum, Thermae, Roman Odeon and Casa Romana, continues.

During the division of the Roman Empire into western and eastern parts, Kos was ruled over by the Byzantine Empire. Christianity had spread early in Kos, as the Apostle Paul had visited the island in 57 AD and planted the seed of a new religion that spread quickly. A number of early Christian basilicas were rebuilt on the island. The island’s fortune was dependent on the conditions of the Empire’s borders, while the island’s inhabitants suffered from invasions and natural phenomena.
The arrival of Saint Christodoulos on Kos was a significant event, as were the construction of Kastriani Monastery and the founding of the castle and settlement of Palio Pyli.

In 1314 AD the island was occupied by the Knights Hospitaller (the Order of Knights of the Hospital of Saint John of Jerusalem). The first period of their occupation is characterised by efforts to organise the Order administratively and militarily, bring the inhabitants closer together and establish new relations. Fortifications such as the Knights’ Castle and the castle of Antimachia were built and reinforced. From the 14th century onwards, the knights were going to defend the island against the Ottomans.
Despite their successful resistance against the great Turkish attack in 1457, thanks to the castles of Palio Pyli, Kefalos and especially that of Antimachia, the Turks finally occupied Kos in 1523. 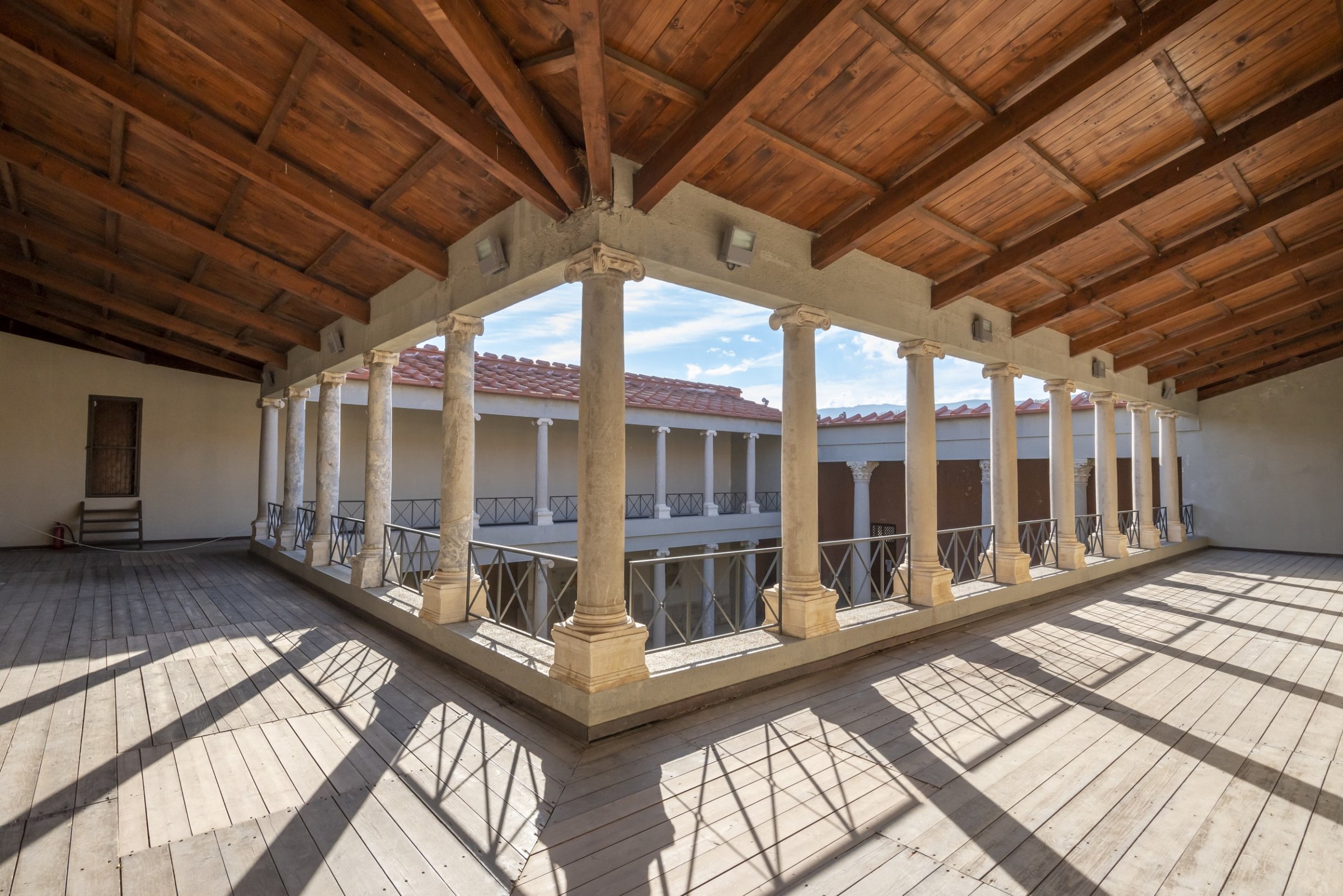 The inhabitants of Kos suffered during the years of the Ottoman occupation. Pirate raids were frequent, as were attacks from the Knights trying to regain the island. In 1773, during the first Russo-Turkish war, the Russians also tried to occupate Kos.
The revolution of 1821 found Kos extremely weakened as the island was hit by a major plague. However, after the declaration of the Revolution, the flag was raised in Kefalos. It was in the sea area of Kos, however, that one of the most important events of the Revolution unfolded: the naval battle of Gerontas and the defeat of the Turkish-Egyptian fleet.

The archaeological museum, a classic example of Italian architecture of the era.
1912 AD - 1945 AD
Italian rule

Despite the Turkish pressure, the people of Kos retained their Greek identity and Orthodox religion. In 1912, the Italians occupied Kos. Despite the initial hopes of the island’s inhabitants for a unification with Greece, the Italians settled in the Dodecanese permanently and in 1923, with the Treaty of Lausanne, they legally acquired the island.
The Italians considered Kos an important tourist centre and started various infrastructure projects. Some of the island’s most iconic buildings were constructed during this period, such as the Town Hall, the Administration Building, "Egli" (then Hall of Fascism), the Archaeological Museum, etc. After the devastating earthquake of 1933, the Italians started excavating Kos, restoring ancient monuments and rebuilding Kos town.

Although Greece entered World War II on the side of the Allies, Kos and the rest of the Dodecanese were still under fascist occupation. However, the Modern Greek Sacred Band fought alongside the Allies in the Middle East with many volunteers from the islands, including Kos. After the surrender of Italy, Germany invaded Kos to prevent its occupation by the British. In October 1943, the Germans invaded Kos through land and air and managed to occupy it despite the brave resistance of local, Italian and English soldiers. As the Nazi domination of Kos began, a period of terror and brutality began as well.
Finally, after Germany’s defeat and a brief British occupation, the long awaited moment had arrived. On 7 March 1948, Kos and the rest of the Dodecanese were reunified with their homeland, Greece. 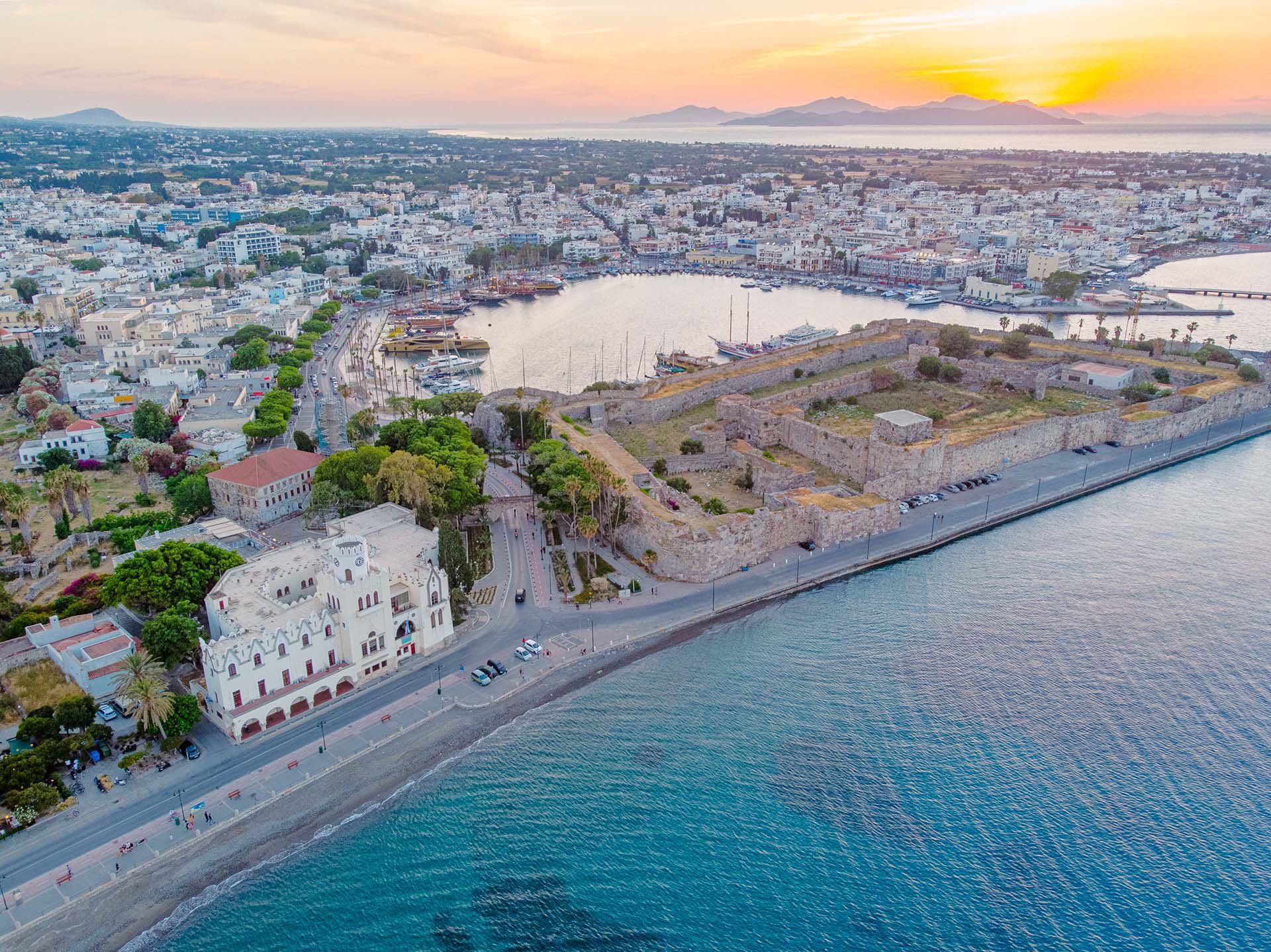 Nowadays, Kos is a contemporary destination that embraces and respects its long history, awaiting to share it with all its visitors!

Kos.gr is the official website of Kos island Greece, managed by the municipality of Kos.
All texts and media in this website are copyrighted
unless specifically stated otherwise.
Information for visitors
How to visit Useful phone numbers Getting around Kos Marina
Help & Support for travelers
Ask our support bot
Contact us
Send us an email:
marketing@kos.gr
Phone the travelers' info office:
+30 22420 20107
Social media
Facebook Instagram Twitter Youtube